Some More On Oboe Reed Openings 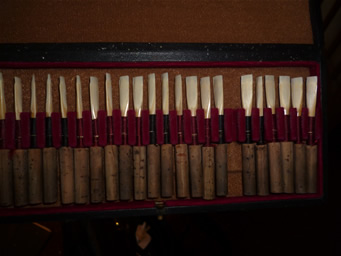 First off, I have not posted in quite awhile. Lots of stuff…sorry. i will try and post more often now. Some good resources are available.

So lets get on with the topic at hand.

I am constantly looking for new stuff and trying everything I can think of that might help me in my oboe reed making. That includes experimenting on how i actually start the reed and how long I let it sit before actually scraping it. On thing I have tried that seems to work is to scrape the tip a bit, then JUST the channels of the heart and back, then clipping the reed and letting it dry out completely. Leave a bit of bark at this stage in the spine area. This is important.

What I have found is that I can squeeze  the opening a bit more to make it larger at this stage when the reed has just been clipped open, and it seems to be a bit stronger and stabler later on. I would rather scrape on a reed with a larger opening and close it down than trying to coax a larger opening later on. It just doesn’t seem to work.

So give it a try and see if it works for you. I will be posting a bunch of videos from Youtube that I think show some great examples of both playing and reedmaking in this style. 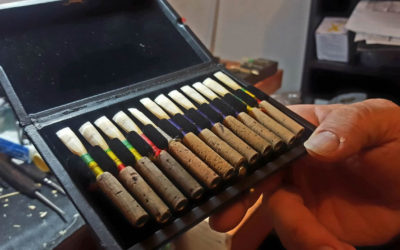